You may have noticed that in covering the punk scene in Lima, we’ve been all over the place. We started off with the famous punk band form the 80s, Narcosis, with our interview with drummer George “Pelo” Madueno.

Then we fast forwarded 30 years or so to cover contemporary punk and hardcore bands like El Terrible Y Los Mongoloides, Los Lemmings, Epidemia and more when the bands played some showcases for us.

Now we’re rewinding the clock again going back again to the 80s, with a band that was right there with Narcosis when Lima’s 2nd wave caught hold, the legendary Luzemia. Luzemia’s original members were Daniel F (Daniel Valdivia), Kimba Vilis (Gustavo Valdivia) and Montaña (Raúl Montañez) and they were an extremely influential punk band and  put together a ton of good material.

Luzemia’s guitarist, Raul “Montaña” is now also a guitarist for another legendary Lima band, Voz Propia. I caught up with Raul and Miguel Trujillo, longtime vocalist for Voz Propia, and the rest of the band at a rehearsal where they were getting ready for a big live concert celebrating 25 years playing together.

Voz Propia’s sound is a broody, electronic induced post punk style of music which I happen to dig.

As you might expect of a band that’s been around this long, the guys tell me their sound has varied dramatically over the years which I guess I could describe as of a mash up of Joy Division/Peter Murphy/Gary Newman/New Order, etc.

The guys graced me with a few little ditties along with interviews where Raul and Miguel very patiently took me through some of the history of the Lima’s 2nd wave of punk music in the 1980s. Because the band continued rehearsal in the main space and we had lighting issues in the rest of the space, we ended up doing both interviews in the tiny rehearsal studio’s bathroom. My first interviews while sitting on the toilet, how very punk!

After the interviews they also invited me out to the show that upcoming weekend.

As described in my last post, there were two punk shows on the same night that weekend in Lima, but as the punk gods were shining on me this night, they were literally within spitting distance from each other and I was able to volley back and forth all night. 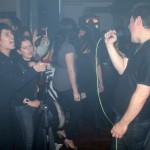 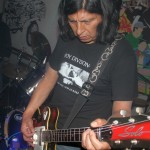 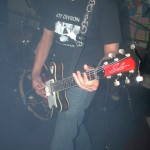 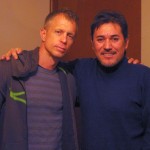 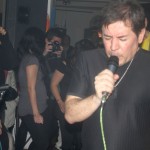 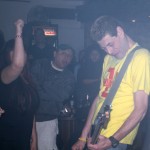 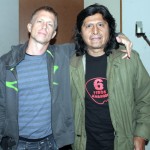 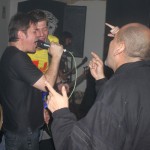 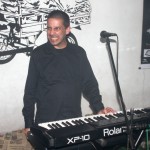 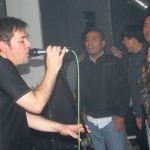 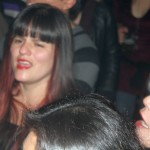 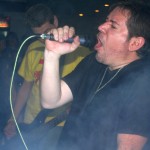 The first show was a no holds, barred traditional hardcore punkfest featuring 7 or 8 contemporary “anarchy” punk bands. Now Voz Propia is no anarchistic punk band but I wasn’t the only one bouncing back and forth between the anarchy Punk show down the street and Voz Propia’s decidedly more cerebral show.

Mixed in with the 30 and 40 something year old hipsters, there were some spiked jackets and mohawks in Voz Propia’s audience as well. I took it as a testament to Lima’s sophisticated and varied musical palette and Voz Propia’s rich history in the punk/alternative/underground music scene there.

I’ve included a video clip of their rehearsal so you can sample their music below, but to REALLY get a good taste of what Voz Propia has to offer, give their myspace page a go and give em a listen. They really are a fine band and a nice bunch of guys too.

Our time travel through Lima, Peru’s musical tapestry is not quiet finished just yet. Next up, we FINALLY go all the way back in time to a much anticipated interview with one of the members of what some to consider to be the very first punk or psychobilly band of all time, Los Saicos (pronounced Los Psychos).

And finally, we return to the U.S. of A. to give you some punk insights from NYC, LA and a little place down south called Tennessee where a couple of guys named Johnny Cash and Elvis Presley used to hang out.