Story of My Life: Traipsing Out to See “Social Distortion” 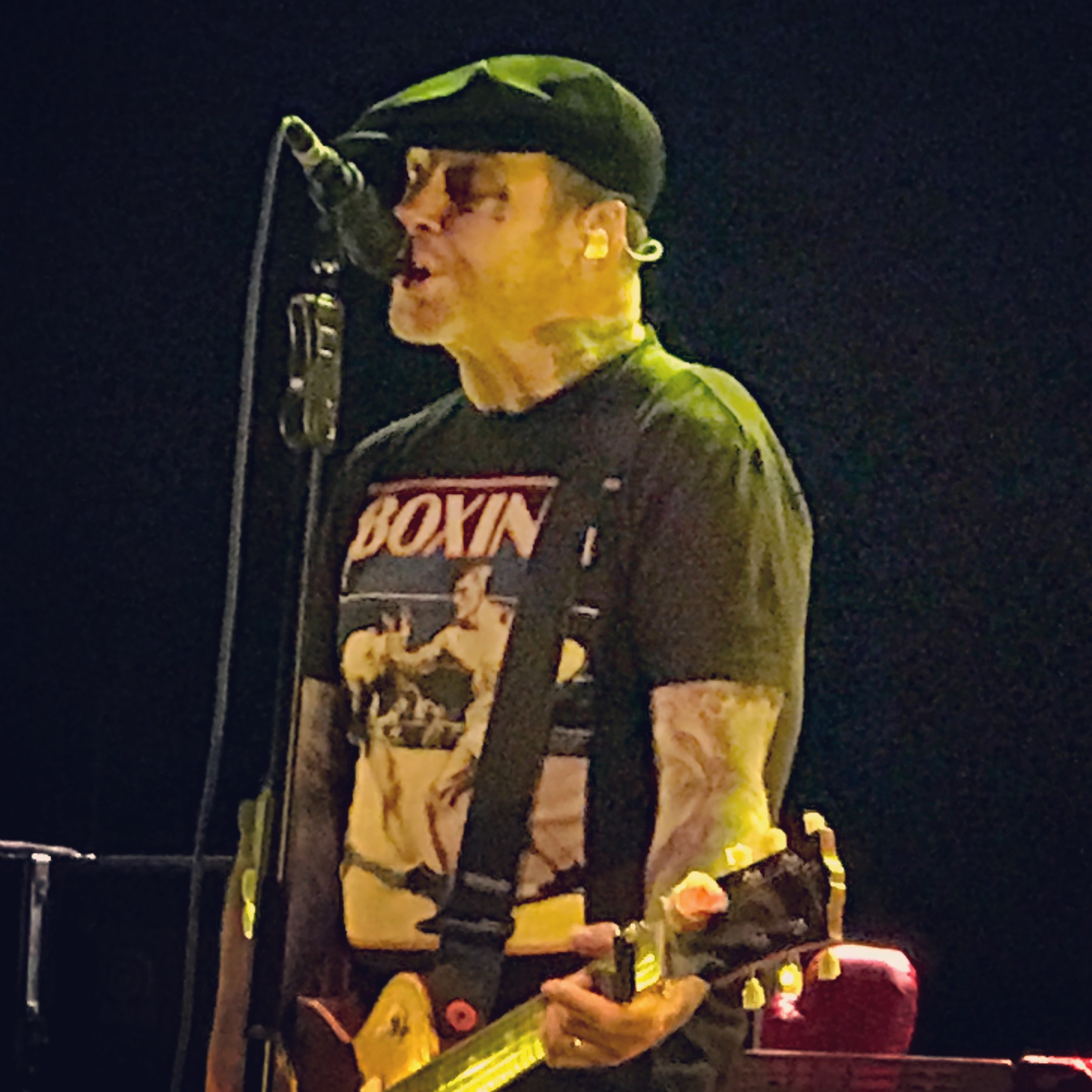 For some reason, unknown to me, Social Distortion, to my knowledge, has not toured within the 5 boroughs of NYC (Manhattan, Brooklyn, Queens, Bronx or Staten Island) since way back in 2006 when the Roseland Ballroom was around.

I saw that show and I’ve seen Social Distortion probably over a dozen times in several different locations since, including Los Angeles, Las Vegas, San Francisco, New Jersey and Long Island and maybe a few more spots I’ve forgotten. For a while it was a bit over the top so I took a Social Distortion Detox of sorts.

This last trip out to Huntington, NY at The Paramount to see Social Distortion was a tad annoying. I was busy, it was adding a good $50 to the cost of attending the show ($26 LIRR Round Trip from Penn Station to venue / $15 RT Taxi from Train Station in Huntington to Venue / $5 Subway to Penn Station from my apartment) and about 3 hours to my night out.

But I hadn’t seen Social Distortion since.. well, honestly I can’t remember the last time but it was probably around 201o, or 2011 or perhaps 2012. In fact, I haven’t seen many punk shows in general lately and I was having serious Punk and Social D. withdrawal. I had planned a trip abroad, but decided against it when I saw that Social D. would be in my general vicinity this particular weekend and decided it was high time to re-acquaint myself with Mike Ness and co. live.

They did not disappoint.

The opening act featured the very, beautiful and talented Jade Jackson, who reminded me of a bit like a modern day, millennial Dolly Parton, if Dolly Parton were born in California and was a dark haired, exotic beauty and had a slightly punk edge to her music. Her melancholic, roots country and rock infused songs were mostly ballads, but when JJ switched to the more rollicking cowboy country, Johnny Cash inspired hillbilly tunes, the crowd responded and so did I. I’ve already purchased her latest CD HERE and have hit the repeat button on the ipod on a couple of her songs. I will also follow her career; a career, Ness has apparently taken an interest in as he came out on stage during her set to talk Jade up to the crowd.

Speaking of the crowd, I continued to be fascinated by the very mixed nature of a Social Distortion crowd and specifically a punk(ish) crowd in suburbia on the East Coast. There were some old geezers (of whom I’m going to have to soon count myself a part I suppose) that probably grew up on Social Distortion in the 80s and 90s (I did not as I discovered them later in my life and their career in the very late 90s). But there were a surprising amount of youngsters as always, some fully punked out in their Mohawks and Doc Marten boots but most, just regular, working class, blue collar looking folks…who maybe are tattoo artists, mechanics, UPS drivers, etc.

But also in there were some white collar, (maybe a more enlightened Wall Street DB or two even who’s musical taste runs beyond EDM or Kanye garbage), well off looking folks mixing in the “General Admission” floor area where a punk pit quickly formed with the very opening song, a decidedly non-punk track off the Hard Times & Nursery Rhymes CD (forgive me, I didn’t record the set list as I had no intention of writing or reviewing the concert… I WAS after all, taking the night OFF).

But the mixed crowed was as enthusiastic as I can ever remember at a Social Distortion show. Maybe it was because it was a summer Saturday night but the place was packed, and the crowd was singing along to every word to almost every song, which in this particular case consisted of everything from one new song I’d never heard of (Scars) to some way back stuff like “Mass Hysteria”, “When She Begins” and my personal favorite and 1st time ever seeing  performed live “Dear Lover”.

Ness waited until the end to play “Ball and Chain” and later a 4 song encore to wind things up included “Misery Loves Company” (sans Mr. Springsteen), as well as a rollicking version of “Story of My Life” and after some playful teasing back and forth with the crowd, the old Johnny Cash favorite “Ring of Fire” ended the night in typical Social Distortion fashion.

Mike Ness had many good, natural and witty interactions with the crowd and I’ve never seen him so at ease before.

At one point, he brought a young, 11 year old fan on stage to talk to him about the importance of questioning history books. I was hoping this was a lead in to “Don’t Drag Me Down” (…”your history books are full of lies”), but no such luck.

DDMD was the only thing missing from what was a magical, incredible night for this Social D. fan.

I shared a taxi both to and from the venue back to the train station with 2 different sets of Social Distortion fans, both sets in similar ages and both from NYC area. We talked about Social Distortion concerts of the past, all of us trying not to get too excited.

It’s too easy for me to lapse into some kind of celebrity worship that I truly despise and frankly normally, don’t understand.

I’ve met too many “famous” folks in my line of work and I just don’t give a damn. It’s not because I don’t respect them, it’s because I respect them as real people and see them as just that, flaws and good points and all and I find regular folks way more interesting.

I never got excited about meeting and hanging out with anyone including one unimpressive rich NYC real estate billionaire (who’d later become President) and his famous and now very powerful daughter. But I would get excited about meeting Mike Ness because his music was so damned impactful to my life. It literally, turned this “punk” who didn’t know it, onto an entire way of looking at the world, that gave my own very punk view of the world, some legitimacy … some explaining.

Why was I a smart, relatively good kid but ALWAYS in some kind of minor trouble growing up? Nothing major, but I saw people die. I could have been that guy, bleeding to death on a country road at  less than 18 years old. Never knowing the joy and pain of what life was to bring me.

Yes, with Social Distortion, it’s different. Their unknown status outside of certain circles perplexes me. To me, Mike Ness is a national treasure. Why haven’t there been documentaries made (I mean recent ones) and books written about the guy’s life and career. How can guitarist Johnny 2 Bags release a solo effort (Ness covered one of his songs, “Hope Dies Hard” that was hauntingly beautiful and I hope Ness covers and puts out in an upcoming release), and tour places like Mercury Lounge in NYC without folks going bananas. This is Johnny 2 Bags folks. Show some respect. Lots of it.

They both deserve more in my view.

I always thought it was that lack of recognition that fueled my fascination, that of course and the love of music. But last night, hanging out with other like-minded souls so obviously into this band, that isolation melted away and I’m more fascinated than ever with the man, the myth the legend that is Mike Ness and his band of musicians who so seamlessly fuse roots country into punk rock.

If and when I do meet him, I’m so wanting him to be that nice guy, not the douchebag famous person you happen to meet and then their insecurities bubble to surface  like so many C level celebs.

I put myself out in the public eye a bit beginning in 2013 with the premiere of “Raw Travel”. I remember distinctly the 1st time I was recognized because I was way more excited than the guy who recognized me.

Since then, I’ve been taken off guard on more than one occasion by an enthusiastic fan or just someone who’s like “hey, I know you”.   While, I hope I reacted well, reality is, it happens so rarely, I can’t get used to it or expect it so I may act a little odd because I’m just not used to it.

With so much choice competing for folks’ attention these days, it’s a real honor for someone to say they give a damn about what I do because sometimes, frankly, I can’t tell if it’s even a decent effort or not.

I’m not saying I know what it’s like to be Mike Ness or other famous and semi-famous folks, I’m just saying I have a tiny taste that if I magnify by 100,000 gets me an idea of what it might possibly be kind of like.

Why do I bring this up now? Because I don’t give a damn about 99.9% of celebs I don’t care but I do care about this guy who turned me on to not only punk music but an entirely different way of looking at the world when I accidentally bought “White Light, White Heat” CD by mistake several years ago.

I’m sure Mike Ness, with his distinctive tattooed body and his 30 year career in music, even in the fringes of punk and rockabilly genres,gets recognized a bunch.. especially on the West Coast. He’s a respected musician and icon and I’m sure he handles it well.

That’s the endearing thing about punks I’ve met over the years, they don’t act like celebrities, they act like people.

I hope Mike Ness does too as I desperately want him to be that cool, calm customer I daydream about singing on stage with some day and featuring on Raw Travel. Hey a fella can dream right?

Thanks for a great night out Social Distortion and Jade Jackson. It was so worth the trip.