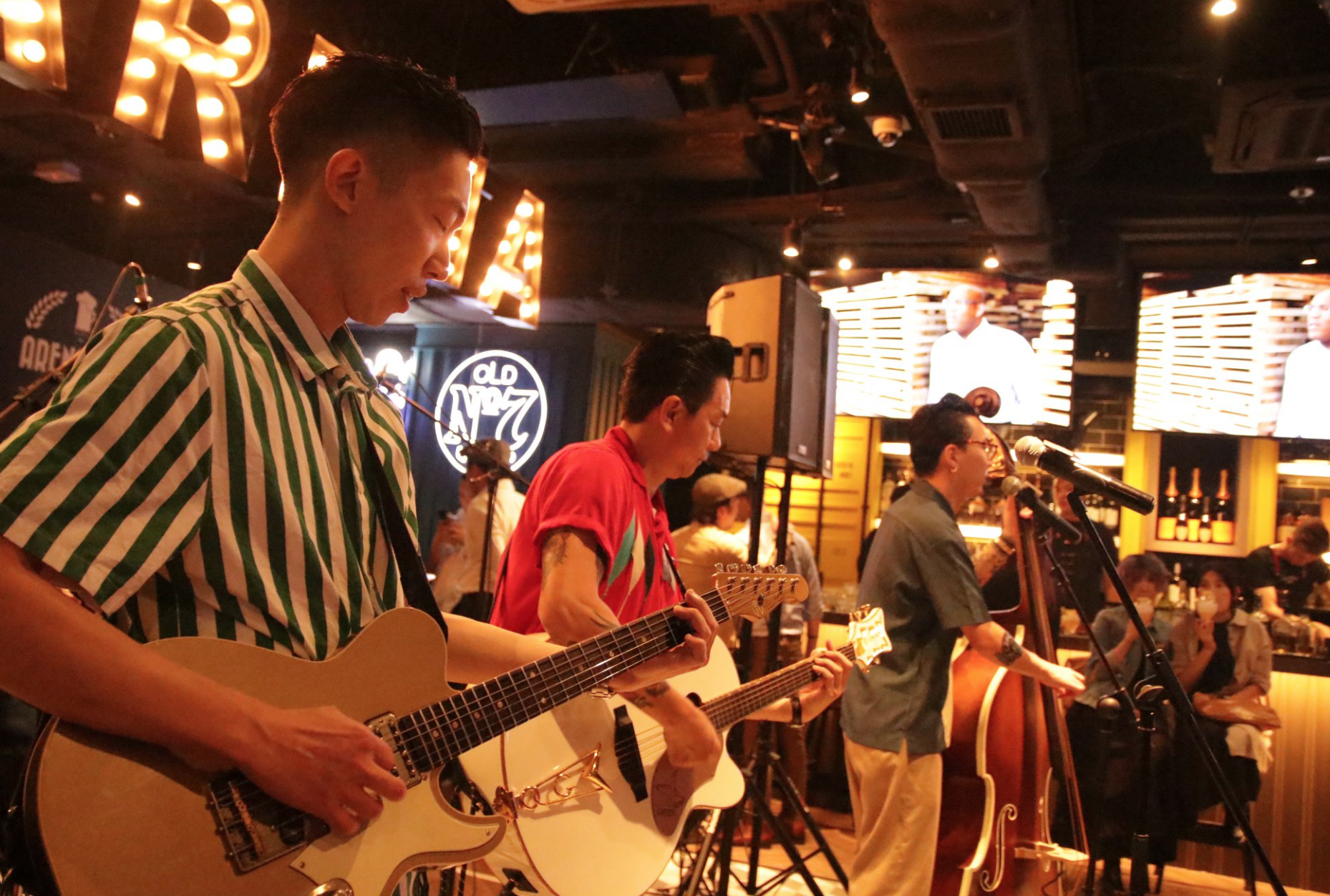 When I visited Hong Kong, it was my first visit to China, and after a brief flight into the former British colony I took a train over to Guangzhou, China to meet up with another friend from the U.S. who was doing some business there. We spent a gloriously, culturally confusing few days in Guangzhou, Guangdong and other parts of Southern mainland China reveling in the culture shock, food and kind people, many of whom I gathered by their reactions to us had seen very few if any non-Chinese before.

I loved ALMOST every minute of China as I’m keen on having my mind blown, especially, when it’s somewhere as exotic and foreign a culture as China.

After returning to Hong Kong, it almost seemed sedate and abnormally normal after such an extreme experience in Southern China. However, I must admit it was super cool not being lost all the time and being able to kind of navigate and ask directions from folks who could at least speak a modicum of English and help us find our way.

Alas, eventually my buddy had to return back to the US early which meant I’d have a little time to explore Hong Kong on my own and you know what that means typically right? Yep, I was in search of the underground music scene there.

I’d heard about the legendary punk bar in Hong Kong called “Hidden Agenda” and the difficulties they’d had trying to keep it open as China has increasingly clamped down on free speech and anyone deemed “radical.”

According to reports, I’d read HERE “Hidden Agenda” had been forced to shut down and relocate no less than 4 times since its inception back in 2009.

So, I wasn’t particularly surprised when I didn’t hear back from the guys that run the place or from any of the punk bands supposedly playing in Hong Kong.

After a few days asking around, I’d almost given up on tapping into any underground music in Hong Kong when I ran into a flyer on the street advertising a big  Rockabilly festival right in Hong Kong that very weekend. Unfortunately, it was scheduled to take place the very day I was to return to the US meaning I’d have no shot of attending unless I wanted to pay a considerable change fee.

Un-dissuaded I did a quick google search of Hong Kong Rockabilly and thanks to the magic of the internet was immediately transported to the facebook page of The Boogie Playboys, pretty much THE rockabilly band in Hong Kong. As I hit send on my facebook message to the guys, I didn’t have high hopes of getting a return email given my experience with the punks, but immediately I was hit back and invited to their rehearsal space on the outskirts of Hong Kong the next day.

I trekked out to the very artistic and industrial Wing Hin Factory Building in Kowloon near the Diamond Hill metro station where the fellas were busy filming another local television interview when I arrived. 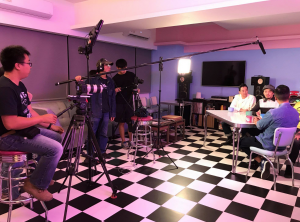 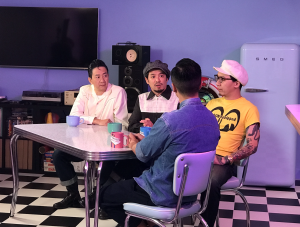 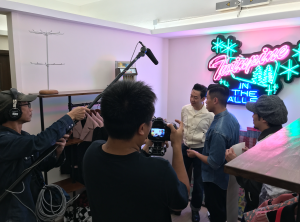 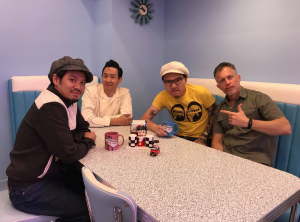 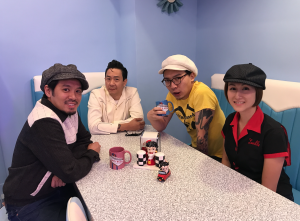 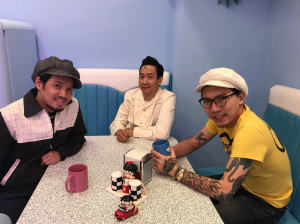 Their local TV interview was big time, with full camera and sound crew and director, so I imagined I didn’t make much of an impression with my solo DIY interview gear. But they guys were gracious, and we eventually filmed an excellent interview in an appropriately decorated section of their modern recording studio they’ve hooked up that resembles an American Diner ala 1950s.

The guys then invited me out to a gig they’d be playing the next evening sponsored by Jack Daniels Whiskey. I explained to them that I grew up just a few miles over from Lynchburg, Tennessee the home of Jack Daniel’s Distillery and we all agreed that it seemed fate had determined us all to meet at this point and time. 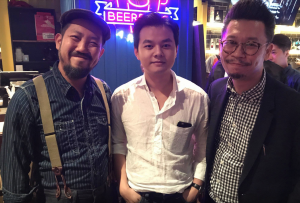 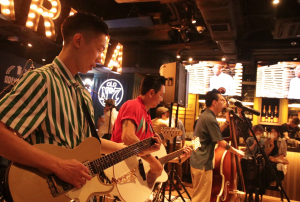 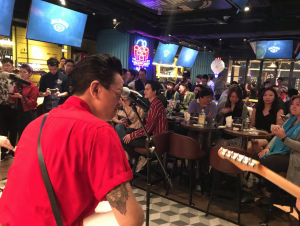 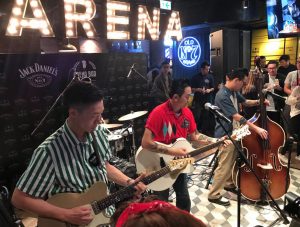 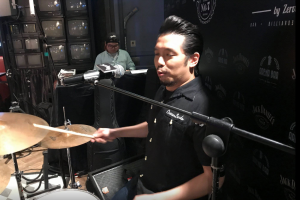 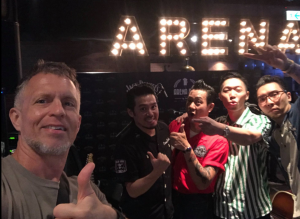 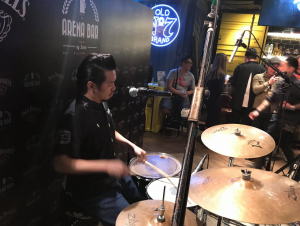 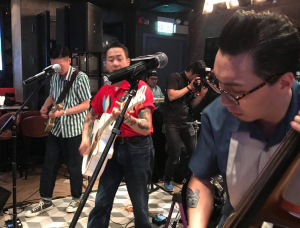 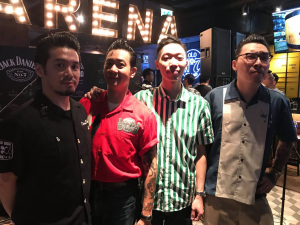 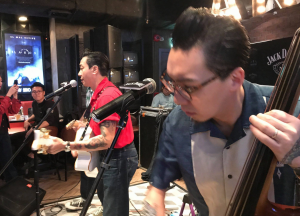 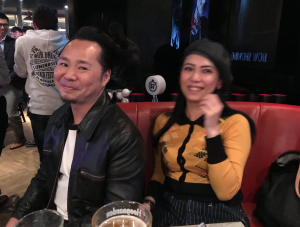 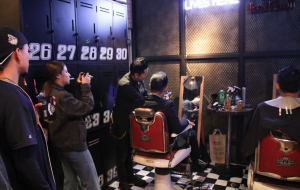 The Jack Daniel’s gig was not a rollicking rockabilly show but a more sedate private affair in an area of Hong Kong known for its happy hour bars full of ex-pats and locals. But it was tons of fun and featured not only the Boogie Playboys but rockabilly barbers and tattooist giving the whole evening a kind of Hong Kong meets Viva Las Vegas feel to it.

The Boogie Playboys performed for an enthusiastic crowd of Rockabilly fans, and those whom I could tell weren’t sure what exactly was transpiring but were 100% into the infectious beats and rhythms my new pals were cranking out.

It was my last evening in Hong Kong and what a great way to end it with a bit of a cultural mash-up between 1950’s US and 2018 Hong Kong.

In my interview, I asked the fellas about the implications of China’s increasing influence on Hong Kong and if they felt it would affect them. They seemed to think it won’t considering their A-Political songs and performances.

I wish I could say the same for Hong Kong’s punk rock and other underground musical genres, but my gut tells me things will be just more difficult for those folks, but I hope I’m wrong.

In the meantime, enjoy the photos and videos from my little Hong Kong Rockabilly escape.