Live Music’s Comeback with Descendents and Rise Against 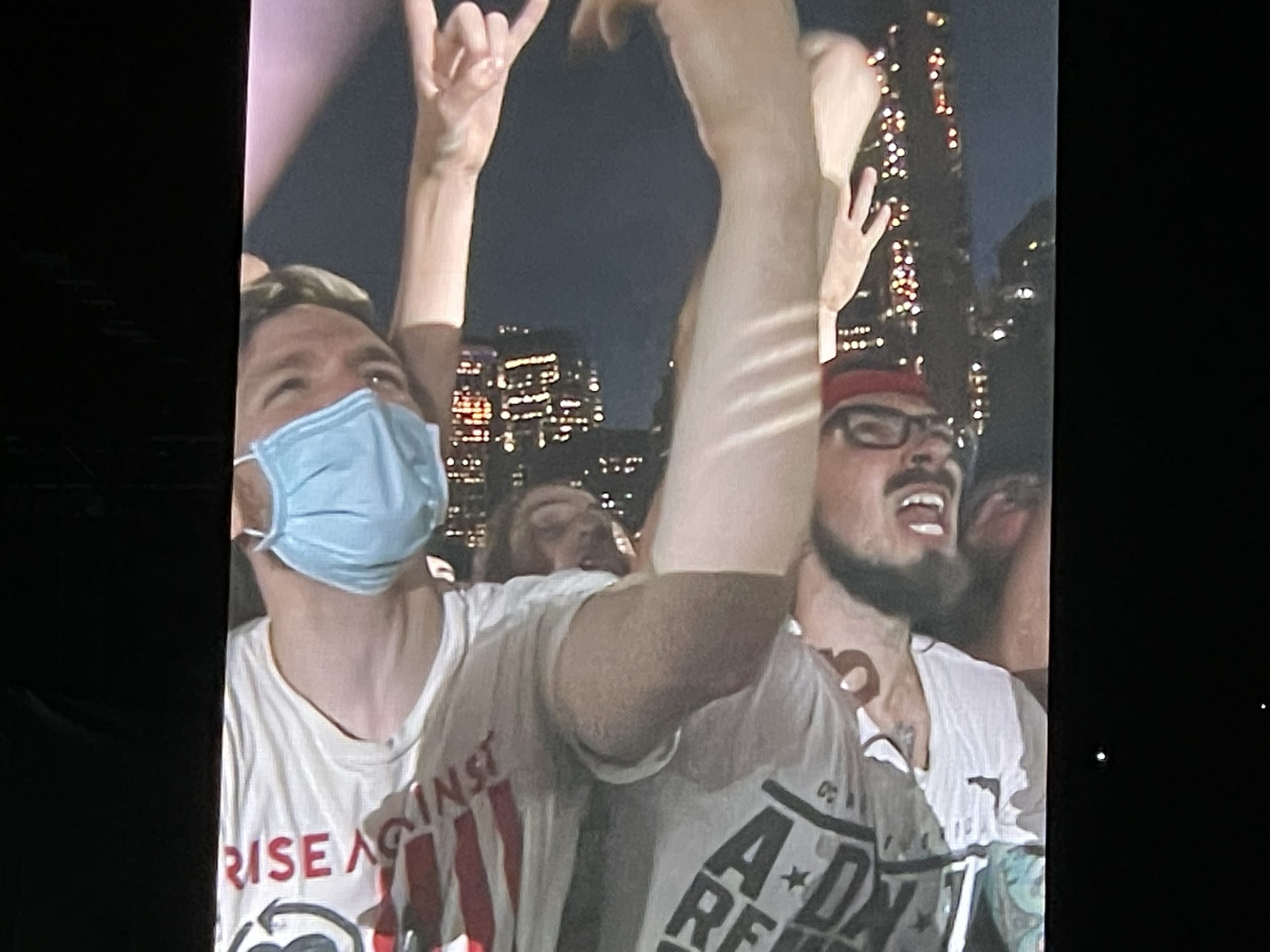 When the seriousness of Covid 19 first began to really hit home for me was the weekend of March 14th and 15th, 2020. That weekend would be epic with back-to-back shows from Against Me & Anti-Flag returning to NYC. I had tickets to see both, one on Saturday and one on Sunday. Both were canceled. You can read about that experience HERE. 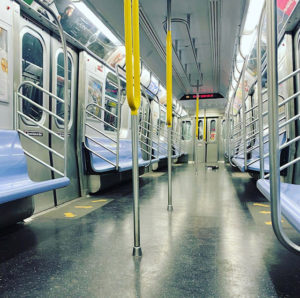 That post illustrates in microcosm the misery, denial, rage, fear, and eventual anger this pandemic has wrought. I thankfully haven’t lost a single good friend from covid. However, I had several close calls, including one who’s still recovering and his life forever altered from a double lung transplant. People talk about deaths as if that is the only negative outcome. “Circle of life” or “Survival of the fittest,” they say. Of course, that is ignorant and callous. 600k plus dead is a  “yuuuge” number. And even if people are old, or had pre-existing conditions (which is a myth that these are all the people who die), do they not also deserve to live? In the USA, at least, AIDS took out far fewer people in the same amount of time.

But alas, vaccines are here, and we’re all returning back to normal, right? Meh, kind of. 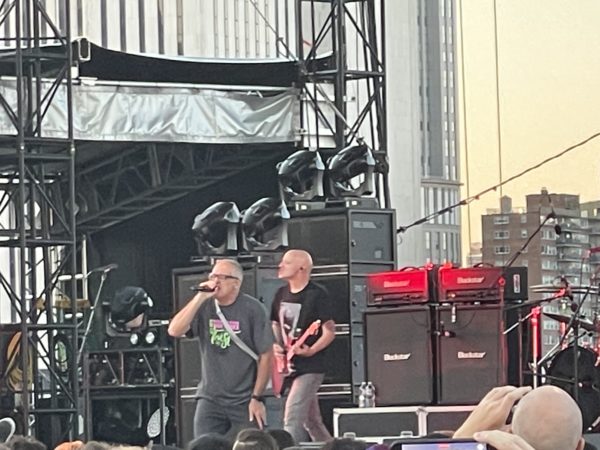 I won’t get into the dis and misinformation fueling ignorant and selfish anti-vaxers. If folks will make a stink about wearing a piece of fabric in front of their face to potentially save their neighbors, do you think they’ll get a shot to do so? Even if it means their own survival? How naive and sweet a thought. Not in this country of individual “freedom,” where “tyranny” and “censorship” are mixed up with selfishness and late-stage capitalism. The left is right, the right is left, up is down, and all of it is a crazy hot mess that has me wondering how humanity survived to this point (and if we even deserved to). 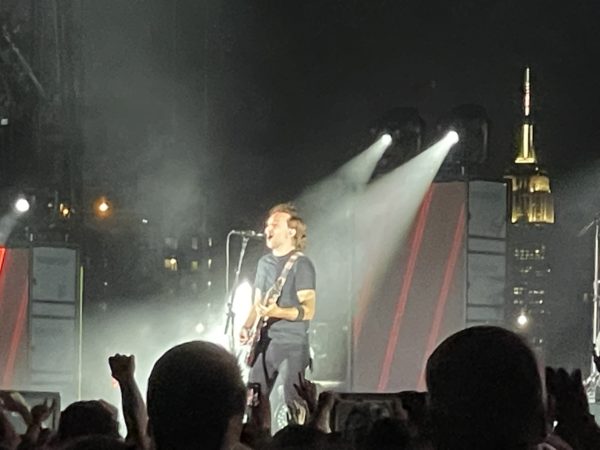 But alas, turns out, most Americans are actually thinking folks of good conscience, but just barely. Just enough to get to 70% vaccination for all US adults but at incredibly uneven geography. The northeastern areas, by and large, are faring better than my “we don’t cotton with much book-learning” southern brethren. But make no mistake, just as there are intelligent and good people everywhere, there are idiots and bad actors everywhere as well. They’re not all right-wing either. Many are left-wing kookoo heads who, in some ways very understandably, don’t trust the systems to keep them safe or have their best interest at heart.

Big Pharma, Trump, the corporatization of our government, I get it. But anyone who does just a modicum of research can see that vaccines not only are safe, they work. Don’t believe me? Then just ask Phil Valentine, a Nashville-based conservative radio host poo-pooing covid and vaccinations on-air. As of this writing, Phil’s been on a vent since late June. But not before returning to work to possibly infect his co-workers, because he thought Vitamin D would be a cure. 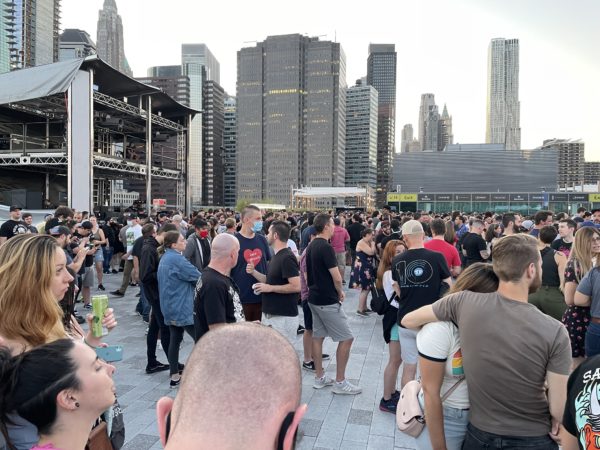 But all of this was blissfully out of my mind. I’d been out of the country (well, kind of), filming in Puerto Rico, where I was so busy, I had no time to contemplate such silly shenanigans.

In Puerto Rico, by and large, covid was taken seriously, and I was impressed with how people abided by mask protocols. Covid was a million miles away from my mind, thankfully, and I returned to NYC to attend my first punk concert in almost a year and a half.

It was outside at Pier 17 at NYC’s Seaport. It was the same beautiful venue I’d seen Social Distortion in after another trip from abroad, Georgia (the country) and Ukraine in 2019. This time, I’d be far less jet-lagged, and this time, I’d have a night of rest and not have to skedaddle over their mere hours after landing.

It was a beautiful, surreal evening, and I just could not miss this opportunity to see a concert outside under such conditions. So I bought a ticket (still some left, I was surprised) and grabbed my mask, hand sanitizer, phone, and wallet, a ritual I have down to a science at this point and headed down.

When I arrived, the first thing that jarred me a bit was the line to get into the venue. It snaked around the deck at the seaport. Was it because of social distancing? Nope. Was it because they were checking vaccine status at the door? Nope. Or dealing with some anti-maskers holding things up? Again, nope. You see, there was no social distancing in line or, at least, not much. Most people weren’t wearing masks, and there was zero protocol to check vaccine status.

Still, I forged ahead, mask on, in the minority, leaving plenty of space between myself and the person in front of me. Unfortunately, the jackass behind me did not. I had forgotten how annoying a crowd of people could be.

Yet, the line moved quickly, and once inside, I could stand apart from the lumps of folks up front. The Descendents were already playing. I only am familiar with a few of their songs, and I didn’t recognize any, so I headed to get a beer. Here, social distancing was being practiced a bit better, and the outdoor breeze kind of lent an air of “people are vaccinated, masks are off, we’re outdoors, let’s celebrate.” 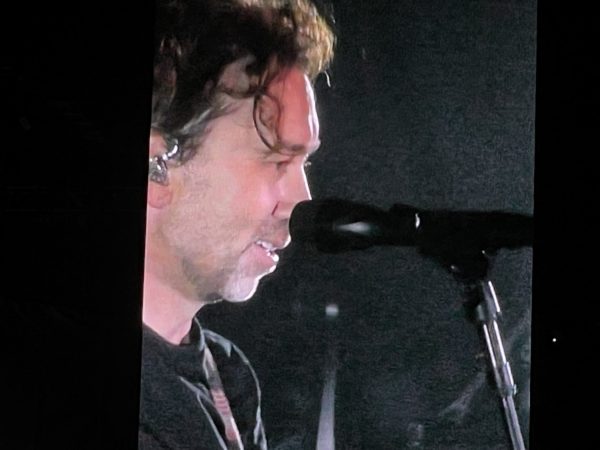 After my first beer, the edge began to wear off, and I began to enjoy myself. By then, the Descendents had wrapped up, and the sun was setting, helicopters were circling overhead, and dusk gave the entire proceeding a truly magical feel.

Then the concert lights dimmed, and onstage came Rise Against. Lead singer and guitarist Tim McIlrath vaulted onto the front speaker in a triumphant stance, and the crowd up front went wild. I know that because I was in the back, watching the monitors on the big screen of the crowd upfront. I did a silent prayer that 90% of this crowd is vaccinated. Then I just tried to enjoy the rest of the evening without thinking much about it. All the while, my mask was on except when drinking a beer. And I did my best to keep some kind of distance between myself and others.

Between songs, Tim often talked about this concert being a celebration. He expressed how grateful he was to be back on stage, doing what he loved. The crowd responded in kind. 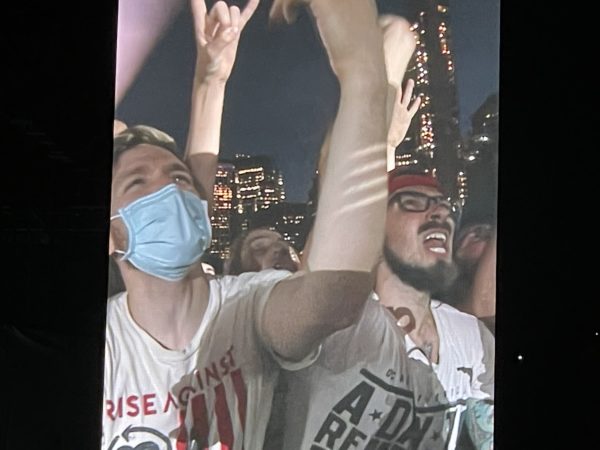 I thought about the vaccine and how it allowed me to go through the motions of a life I once lived. Things like the gym, traveling, filming, going to concerts, just talking to people without constant worry or the silly politics of covid.

The concert happened just a hair before the Delta variant of covid made NYC a hot spot for covid again. However, at the time of writing, a little over a week after the concert, Delta is mostly a severe concern of the unvaccinated. I have a good friend with the condition that doesn’t allow her to get vaccinated yet. I thought of her, locked up and unable to enjoy life because of a few selfish pricks. Were those selfish pricks in the audience of this show. Most certainly, there were some because vaccine status wasn’t required to attend.

How much covid got exchanged down the front, and did anyone have any complications from it? Or pass it to someone who did? Did that concert inadvertently and indirectly end up killing someone somewhere down the line? We’ll never know because 1.5 years into this, our contract tracing capabilities are still pathetic. But I do believe, because of the vaccine, the likelihood of that happening is significantly reduced. As for me, I got tested a few days later and was once again negative. 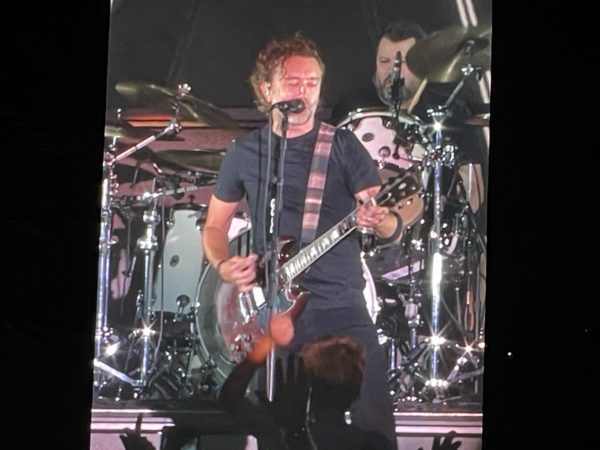 But the attendees at the concert, some masked, most not… relished this momentary relief from a harsh, brutal reality we’ve been living for 18 months or so. And so did, seemingly, the band. I once met lead singer Tim McIlrath backstage at a concert he played with Rancid years ago. He seemed like truly the nicest guy. He is also famously vegan, which I aspire to be (now I’m just “mostly meatless”), and highly respect.

But I had to wonder – is this where the looney extremes meet? You know, that crazy area where the political ideology of the left and right results in fascism or where hardcore vegans turn out to be hardcore anti-vaxers?

I don’t know this for a fact, but I guarantee there were anti-vaxers, anti-maskers, pro-punk rockers in the crowd. I hope they were a small percentage because refusing to safeguard our fellow brothers and sisters who can’t get vaxed is not very punk rock at all.