Violent Femmes & Me First in NYC

It was a beautiful September NYC evening. Perfect for an outdoor concert, made more enjoyable by the fact that all attendees had either been fully vaxxed or tested negative for covid. No more guessing someone’s status. No more stress about someone getting right up next to you to yell and spit in your ear (well, okay that’s still annoying, but at least not as dangerous). Just sit back, relax and enjoy the music, like the good old days.

Pier 17 by the South Street Seaport in downtown NYC is rapidly becoming my favorite spot for live music in NYC. I’m not saying it will be thus in January or February, but it is for the summer and fall of 2021 and likely for some time to come as some are committed to living like it’s the 13th century and covid is going to be with us for a while.

The surreal sunsets over the city are made even more enjoyable by hearing music from a band that shaped my view of punk music and my life some 25-30 years ago. Yep, I’m getting old, and I’m happy about that fact, considering the alternative and the many times I should be dead. I’m grateful for every damned moment, especially post-hard-core covid (one hopes). 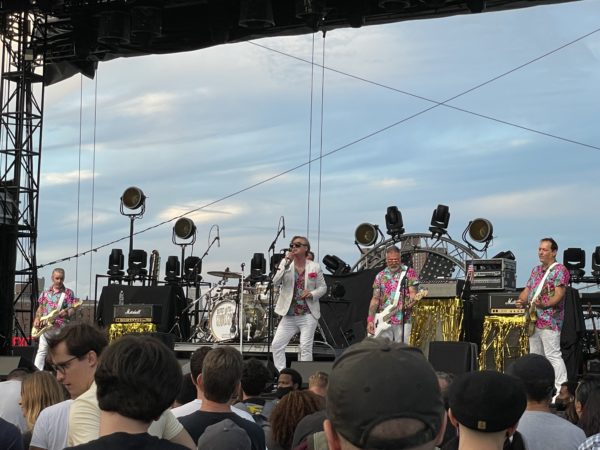 Me First & The GGs

This particular Tuesday evening was bliss. I arrived just as the “Me First and the Gimmeee Gimmmes” were almost finished with their set. But not before chuckling at the lead singer, John “The Swami” Reis, AKA Spike of this hilarious spoof cover band. The entire crew was clad in white pants and jackets with brightly colored Hawaiian shirts, ala the Beach Boys.

It was fun seeing Johnny “2 Bags” (because one is too few and three are too many, as Spike riffed) of Social Distortion play guitar for such a non-serious band. He was joined by CJ Ramone on guitar, and Andrew “Pinch” Pinching of The Damned, pinch-hitting the drums. This was some much-needed fun. When the mic went around to the band members to say a word or two of gratitude, it could have devolved into something serious, but it did not. Did I mention this was fun? It would be all fun, all the time. No seriousness allowed.

The closest to serious it came was as the band exited the stage, Spike announced that the band hoped to return “under less dystopian circumstances.”

Yep, we were having a good old time, but it’s still heavy at times indeed, and I think everyone, deep inside, remembered this fact. Nonetheless, I’m very thankful for “Me First” for lightening the mood… no thunder necessary. 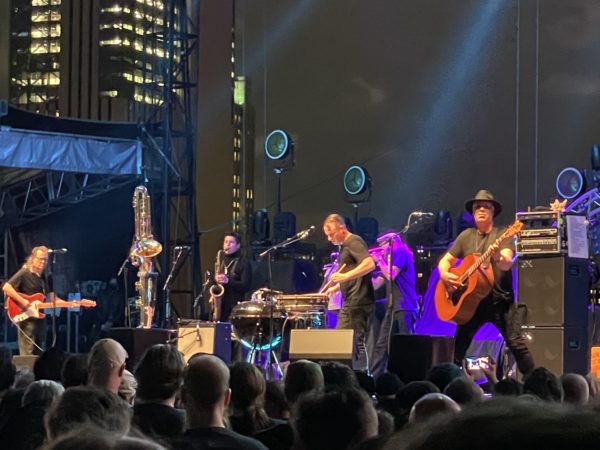 Speaking of lightning (see what I did there?), I thought I was there to see Flogging Molly, but I was wrong. Despite the lightening (sic), sans thunder, the rain would come, and I’d bolt before they played their first complete song. I’d seen Flogging Molly before in Las Vegas opening for the afore mentioned Social Distortion many, many moons ago.

I’d just seen Dropkick Murphys, the undisputed kings of Irish Punk (HERE) I didn’t need to see another 20 or so folks on stage kicking up their heels to a new take on old folk music from the old country. Been there done that just a month ago.

Don’t get me wrong, Irish punk music is fun as fun can be, especially live. Still, I find it a tad limiting musically and the audience a bit intolerant to other types of punk music. Too naval gazing, too “all in the family,” too provincial, and as far as I know, I can say this because my roots are Irish. Maybe I’m just self-hating.

Or recounting the conversation I had with another concert go-er in a Rancid shirt and there ONLY to see Flogging Molly. She said she hated Violent Femmes who played between Gimme and Flogging’s sets and was “only there for the Irish punk.” Good luck with the three or four decent Irish Punk bands out there. What a small number of artists to limit yourself to?

To each their own. I guess Irish is more than ethnicity… it’s a religion that encompasses all aspects of one’s identity, at least in the northeast where Irish roots run closer to the surface.

Maybe when I visit the supposed homeland, I’ll change my mind. I’m open to it. I look forward to it actually. And I as I said, I do enjoy some heel-kicking Irish punk (or non-punk Irish music) from time to time.

But hating on legends like the Violent Femmes? How is that possible? These guys are musicians to the kilt, I mean the hilt.

Hell, the guitar player’s acoustic guitar was simply MASSIVE. The stand-up drummer was placed right in front with a mic to sing along and he channeled rockabilly and 60’s garage rhythms. Remember they were prominently peaking in the underground scene and on college radio in the mid to late 80s and early 90s. They were far, far, far ahead of their time.

Violent Femmes opened with the lead singer “Gordon Gano,” vocalizing the intro acoustically to “Add It Up” with that quavering “Day after day… ”

Then without too much of a pause for applause, VF went straight into “Kiss Off.” But don’t think these guys climaxed before the act had begun… they had more to go.

Thank goodness, because all of this was happening while I was still in the “refreshment” line as the folks from the concession areas worked out an apparent computer glitch (my only complaint of the evening, Pier 17).

Bummer. If these were pre-covid or non-covid times, I’d have been pissed because I would have been upfront in the mosh pit on those two songs (my faves – which I had not heard in at least two decades and frankly had completely, 100% forgotten about).

Forgotten that is until those songs made their way from my ears through the dust and cobwebs as some rarely used nerve pathways began to clear, to the creaky neurons near the primal part of my tiny reptilian brain as it suddenly kicked into high gear. And voila! I was back in college… recklessly drunk and feeling a feeling deep inside that I could not then possibly conceptualize. But I can now.


However, even all these years later, I can’t put it into words. But seeing these early influences on my hibernating, ignorant punk-gonna-be self, live and in the flesh, slowly waking up this long sleeping part of my subconscious was nothing short of mind-alteringly magical.

Femmes ended with “Blister in the Sun,” and there were enough Gen Xers in the crowd to have a decent sing-along at the chorus.

But my favorite part of the show was when I was turned on to some of their music I’d never heard before. Like when they slow-jammed a song they recorded back in the 80s in NYC and said they rarely played. The song was “Never Tell.” I loved the constant refrain of “I do… do… do what I can,” and I memorized the phrase so I could download the song later.

As is so often the case after a live show that impacts me so powerfully, I downloaded VF music catalog and began exploring. I’ve fallen in love with a ditty called “Country Death Song,” which evokes hillbilly music, Johnny Cash rhythms, and a wicked dark folk tale. Here are the opening lyrics of Gordon’s song.

Well, they didn’t play that song, and I wouldn’t have known had they. Still, it does illustrate the incredible range of this talented and, I say, under-appreciated band that’s been playing “American Music” for three decades now. I hope they get their moment in the sun again before it’s all said and done.

As for me, I was so thankful to have such a powerful and influential part of my musical past re-awakened in such an unexpected way. I should have expected it, but I’m happy I didn’t. Instead of being disappointed like the narrow-minded, Miss Irish-Punk-Only-Please lady, I was blown away.

And I had a sudden realization, that no, I had not JUST stumbled upon punk music in my 30s when I bought an old Social Distortion CD by mistake (thinking it was Jason and the Scorchers because they both had a song about “ball and chains”). I had actually been exposed much earlier… and I just woke up a slumbering love that I’d had all along and did not realize. Just as I did, when I heard the Violent Femmes live all these years later.