The Linda Lindas and Jawbreaker In NYC 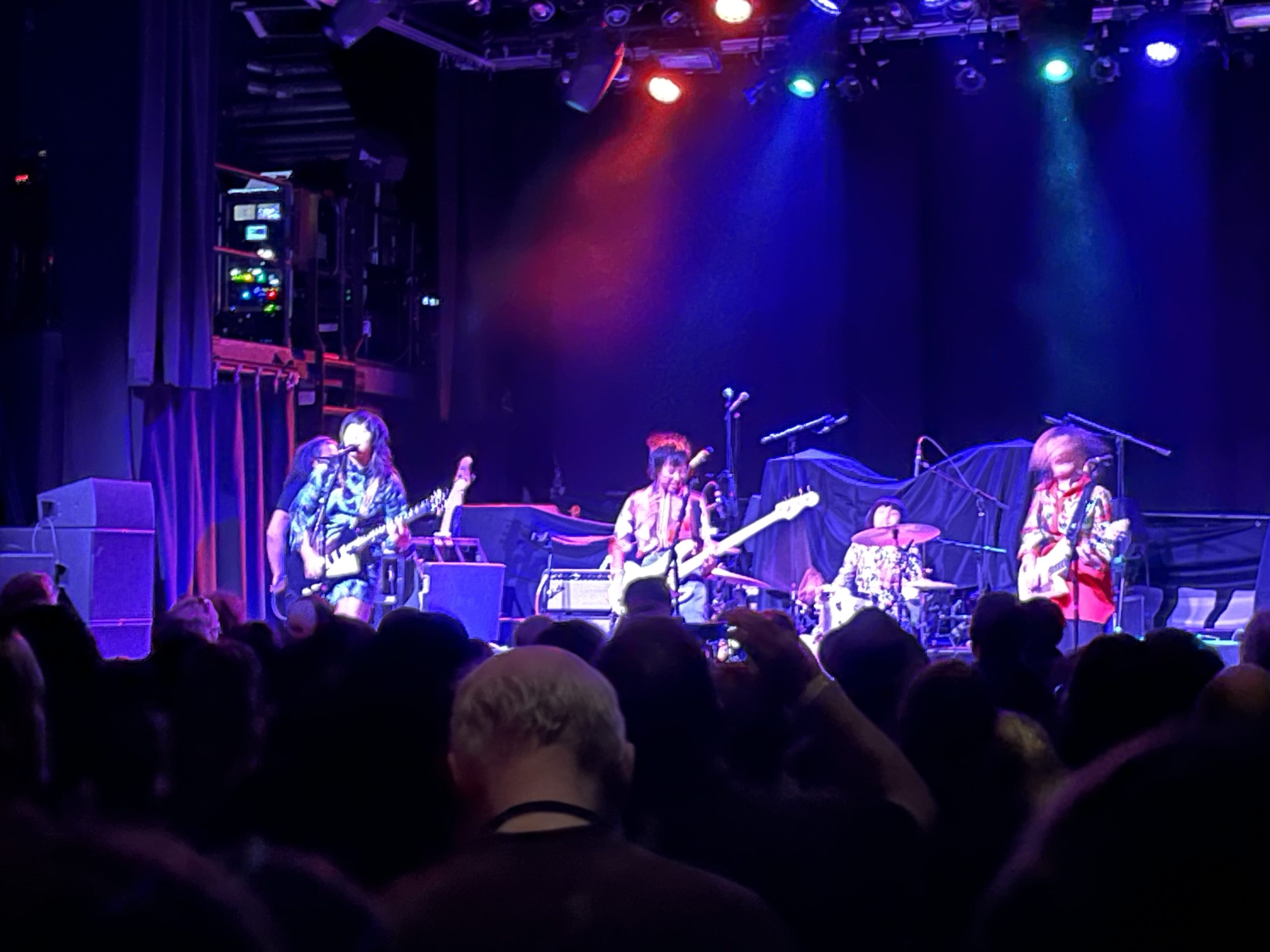 I recently bought last-minute tickets to the third evening of Jawbreaker’s three-night residency at Irving Plaza, celebrating their 25th anniversary.

I arrived kind of late and, to my surprise, The Linda Lindas, the teen, Asian-American, an all-female punk band from Los Angeles that took the world by storm during the darkest days of the pandemic with a cover of Bikini Kill’s “Rebel Girl” was opening.

Unfortunately, they were almost through their set, and I was stuck way back by the bar, unable (or unwilling – as I’m still a little skittish of tight, tight crowds – despite the required proof of vax for entry) to wriggle my way to the front for a better view. 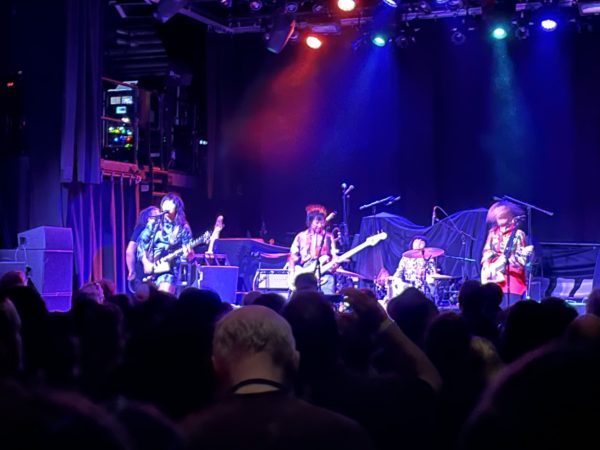 But the sound system at Irving Plaza was excellent, and I heard them well. You can tell a lot from a band when you see and hear them perform live. I saw and heard enough that this band is not some novelty act. They are TIGHT. Here’s a clip of their cover of a GoGos’ tune from the evening.

Melodic and maybe a little popish, but it’s a Go-Go’s tune. Like their eponymous original “Sexist, Racist, Boy,” their heavier stuff has an L7-ish vibe.

Look, I’m not going to turn into a fanboy with t-shirts or anything, but I’ve since downloaded some of their tunes, and they are no novelty act or to be taken lightly. They have important stuff to say.

I like their tracks “Claudia Kishi” and “Oh.” The ladies have been pretty prolific, putting out music every year since 2022, but got their big break on the Netflix film “Single” when they played themselves playing an all-girl punk band.

Sadly, there are too few females in punk music. But name them, and I likely love them. From Joan Jett to Bikini Kill, to my friends from Poland “Brains all Gone” to so many others that I can’t even remember the names… I love the melodies and perspective females bring to the scene.

I’ve interviewed as many female punk musicians as I could over the years in places as diverse as Poland to Costa Rico.

But female punks in general, that’s an article for another time. 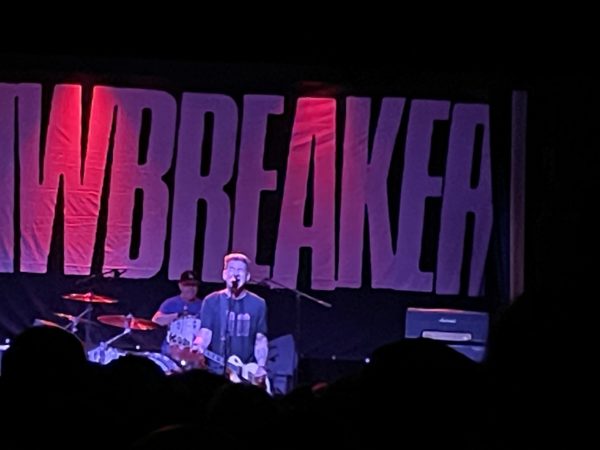 They set the table and mood for Jawbreaker, which came on playing a tight, tight version of “Boxcar,” which is one of my favorite songs and, by my observation, the perfect anthem for the evening.

“You’re not punk, and I’m telling everyone.”

It sounds like some recent comments on this blog after I showed my support for vaccines, masking and taking care of our fellow human beings. Apparently, not being a thoughtful human or not falling prey to disinformation (see past few articles) is not considered punk rock to some lost souls? Alas, these are stupid times.

This crowd was unlike any punk show I’ve been to in recent memory. Older, nerdier, Brooklyn-er. None of that is a bad thing, BTW, just an observation. Not a mohawk or leather studded belt anywhere in sight. I didn’t even notice band tees that generally give me insight into a crowd’s musical anthropology. There were couples, middle-aged or so, reflecting the band and a lot of older white dudes. Again, not a bad thing. Since I guess I am one now.

When one of the singers of “The Linda Lindas” had expressed reservations about opening for Jawbreaker and wondered if the “old males” would accept them, the crowd gleefully cheered, but not too loudly. Because, as I said, the crowd was primarily old males, yours truly, included.

So perhaps I shouldn’t have been surprised when during the Jawbreaker opener, The Linda Linda’s streamed right in front of me on their way to the front, led by a manager, guardian, or chaperone, perhaps.

By the time I realized, hey, it’s them, the last one (lead singer) was in front of me, and I tapped her on the shoulder just as she was heading away. She briefly turned back, slightly alarmed, and after a little fearful look over the shoulder to see if it was a tap on purpose for something malevolent or something imagined- I assume, rushed on to catch up with her mates. Understandable. You never know who can’t take a joke and who’s more thin-skinned these days than white, older males.

They’ve had it so good for so long that they (we) are not used to being the butt of jokes. A tap can mean a lot of things. “Excuse me” or “Hello, you dropped something” or “Hey, just wanted to say I loved the show!” – my intention, or some basement-dwelling incel or troll might say, “Didn’t appreciate that joke bitch!”

This is NYC, where Asian hate has been running pretty rampant. I completely understand her reaction, and I’m so sad it’s like this.

But I had a flashback to the evening I unbeknownst met what would become my cyberstalker for nearly a decade at a GBH show 15 or so years ago. She tapped me on the shoulder… hard. I should have kept going and pretended I never felt the tap (really a thump), but alas, things happen for a reason. That began a miserable experience that I won’t get into now as that’s not only a post but a book or documentary for another time.

Still, I was momentarily distraught by the fact that the singer for the Linda Lindas would feel any bit of discomfort when I tapped her shoulder. Especially since I wanted to spread positivity, not negativity.

I really and truly simply wanted to give her a fist bump or handshake and say “nice job” or any encouragement or positive energy I could. As I recall, we were both masked up, so a smile would have only come through the eyes. But a fist bump is now the new handshake, and I like it. It says a good job. I support you! Why did I want to fistbump?

Shall I list them all? Okay. They’re Asian-American because they’re so young (the drummer is just 11 years old – and can sing!) and females. Do I feel paternalistic? Or like a (much) older brother? haha.

As previously pointed out, I am one of the older males they referred. But I did not take offense. I agree. Most of the world’s problems are caused by older males, including one not-aging so gracefully mealy-mouth lunatic in Moscow and his tattooed alternative supporter Aaron Lewis and his ilk (see Dakhabrakha Returns to NYC Article)

But mostly feel admiration and enjoyment of The Linda Lindas music and bravery.

After watching videos of a bunch of brutal (primarily male) cowards on the streets of our cities, punching old, elderly, and mainly female Asian-Americans the past few years, I’m over this shit.

I’d love to punch a coward out or get punched out trying. But barring that, I can support the Linda Linda’s, which rocked Irving Plaza, not because they are Asian-American, young, or female.. but because they are good. I mean really good. They rocked it.

I almost forgot that Jawbreaker also rawked the joint, but I was expecting that.