Oppressed but Defiant, Punk is Alive in Cuba 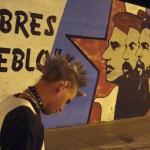 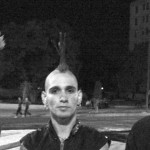 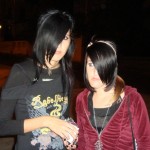 In the U.S.. full time Journalist are granted a “General License” to travel to Cuba and I’d always wanted to go when I was Executive Producing American Latino TV & LatiNation but time and expense prevented that from happening. However, when my former production partner, Renzo Devia asked me to come down to Cuba to help him with his huge documentary on the history of Afro Latinos I jumped at the chance.

I took video and camera equipment as any good journalists and curious documentarian would. The big joke before heading down was that if I found punks in Cuba, then punk truly is everywhere. Well guess what, Punk is alive and kicking in Cuba despite harassment and targeting by the very aggressive Cuban Police.

Calle G (AKA “G Street”), is also known as “Ave. de los Presidentes” or Presidents Avenue and is in a beautiful “upscale” neighborhood of Havana called Vedado. During the day this beautiful street is home to monuments and statues of Cuban heroes of the Revolucion and various other dictators Fidel approves of among a landscape of beautiful manicured shrubbery.

At night, it turns into a zone of discontent for “Los Freakies” (The Freaks) and this is where hundreds of “freaks” of every stripe come to get together. It’s truly a street party with Punks, Metal Heads, Goth, Emos and some regular Cuban young people get together to chat, party, join in sing alongs, etc.

At Calle G you forget you are even in Cuba and there are specific sections for specific freaks, though people tend to mix and mingle.

Finding punks took me and my cameraman about 10 minutes. We were interviewing some emo kids when up the street comes about 5 or 6 obvious punk rockers. We started interviewing them and the crowd starts to gather around us. It wasn’t like the U.S. where people are camera shy and sick of the media being everywhere, it was the opposite, they went nuts for the cameras and everyone wanted on “TV”. I wasn’t concerned for our safety but I was concerned for our cameras, because the crowd was getting bigger and bigger and I was afraid the ever present Cuban Policia would show up and shut us down and possibly confiscate our cameras as we didn’t have permits from the Cuban government to shoot. When I handed out the few Punk Outlaw stickers I had on me and people fought furiously for some cheap stickers that I can hardly give away in the U.S., it was obvious I was under prepared as I ran out in about 2 minutes, having left most of my cache back at my hotel.

My amigo, camerman and translator that night Camilo, kept the interviews moving and we got quiet a few the first night. Unfortunately, during one interview, the Cuban Police showed up just before cameras were starting to roll and decided to arrest our main subject, an older (30 something), mohawked punk who was in a local punk band.

We decided to walk off during this interrogation, thinking we were making things worse for the poor bloke and his friends (and I will admit not wanting the police to confiscate our cameras). They arrested him on the charge of “talking to tourist” from what I understood after speaking with his friends after, despite the fact that we approached him. I still feel horrible about this but not sure what if anything we could have done to prevent it. One of his friends joked after, if an American or other tourist were to stab a Can 28 times, the police would arrest the Cuban for “getting in the way of the knife”.

From what I understand “Los Freakies” on Calle G are routinely targeted for harassment and arrest by the Cuban police and that is no surprise in Fidel’s Cuba. Hundreds of these folks were fully and freely expressing themselves, with their hair, their clothing, their conversations, their music and I guess that just doesn’t fly in communist Cuba. Its one of those places where if the president says your happy and content, then you are happy and content by God.

That being said, the police couldn’t haul the hundreds of Los Freakies to jail as they were grossly outnumbered and I assume any thought of rounding them all up via the military would have caused a hell of a stink and PR nightmare for Fidel and crew. Also, these kids struck me as largely middle to upper class with at least some limited access to the internet (compared to the average person in El Centro or the old city where they had almost no exposure to the outside world except of for the illegal TV Signals from the Spanish TV channel in Miami). The Punks and Los Freakies were not afraid, but were eager to talk to us, to share their stories with the world. Not one person we asked turned us down for an interview and many more begged us to interview them.

Cuba was full of surprises and contradictions I have lots more observations to share (as well as videos and anecdotes to come). But in the meantime here are a few photos from “Los Freakies” of Calle G who serve to remind of the importance of the punk philosophy of questioning authority. I feel a little better about the freedom of the Cuban people now that I know punk is alive and well there. You can see the rest of the photos at Punk Outlaw’s Flikr page

9 thoughts on “Oppressed but Defiant, Punk is Alive in Cuba”