My first full day in Moscow, Russia was intense for a guy still groggy from an 8 hour time change that had my alarm going off at 1AM.

With the "Beat Devils" @ The Grease Bar in Moscow

But I was in Moscow for only 3 days so I had to quite whining about  a little thing like sleep and “man up”.

I started off the day with punk band “Tarakany!” (Cockroaches) as they  rehearsed for a big fan club concert coming up (SEE POST), then I hit Red Square and had a “red scare” from the police (SEE POST) with Maria from Moscow, who filled me in on the scene and other local punk bands.

Now it was time to hook up with Viktor (AKA DJ Spaceman) and partake in a little rockabilly, Russian style. Now in all my travels I’m not sure I’ve ever met a character as interesting and dedicated to rockabilly as “Viktor from Moscow” as he’s better known by Rockabilly bands the world over.

Viktor from Moscow (On Left)

Viktor IS the personification of real rockabilly. He lives it, he walks it, he breathes it. Viktor has a kick ass record collection (over 22,000 records); he once self published a kick ass rockabilly magazine; he still promotes some kick ass rockabilly events and he seems to know everybody in rockabilly not just in Russia and Europe but in the U.S. and Japan as well.

In short, and I don’t type these words lightly, but I have NEVER met anyone as dedicated to authentic rockabilly as Viktor from Moscow.

Viktor is a executive during the day and at night he listens to rockabilly tunes at this new rockabilly spot in Moscow called “The Grease Bar”. On this Friday night, Viktor had arranged for me to accompany him to see a rockabilly band from neighboring Ukraine called “The Wise Guys”.

When I first walked into “The Grease Bar” I felt I’d taken a trip back in time some 50-60 years ago to the Southern U.S. 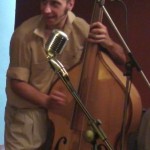 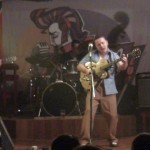 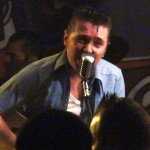 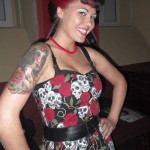 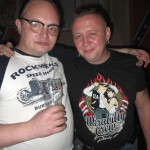 Viktor from Moscow (On Left) 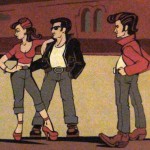 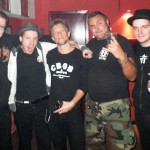 With the “Beat Devils” @ The Grease Bar in Moscow 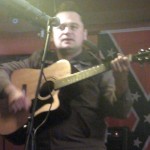 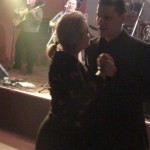 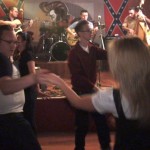 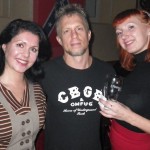 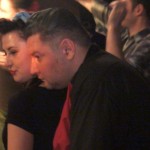 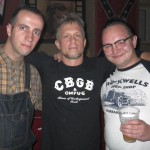 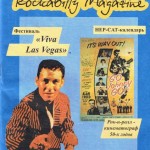 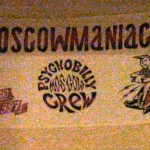 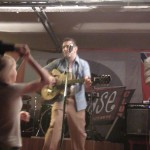 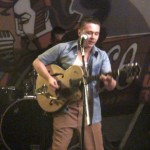 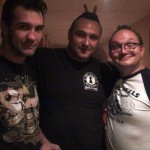 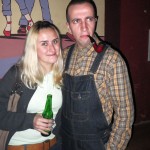 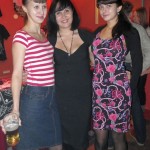 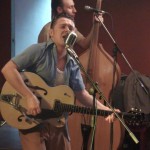 One of the first things I notice is the preponderance of confederate flags all over the walls. Now I’m originally from the South, but I’ve lived in New York for the past 14 years. I have to tell you, even down south it’s a little rare to see confederate flags prominently displayed these days.

Over the past 10-15 or so years it’s slowly but surely become politically incorrect to display the confederate flag in the U.S.

This message has not made it to Russia or if it has, they’ve ignored it. I find during the course of my interviews, that this has nothing to do with race or the civil war, or anything  like that, some lazy thinkers might want to label.  It’s quite simply a decorative prop and symbol of what many Russians rockabilly fans consider a time and place for authentic roots rock music in the 1950s southern United States.

My observation is that most Russians simply are note aware of the flag’s controversial symbolism in present day U.S., just as most Americans have no clue about Russia’s history.

Russians have understandably been preoccupied by contemporary history closer to home, like the fall of communism, the Caucuses, terrorism, etc.

The preceding decades and centuries haven’t been a cakewalk either and go well beyond the scope of my expertise to even attempt to explain here.

No wonder everyone I spoke too said punk and rockabilly music’s main purpose was to entertain and make people “happier”, not to further depress people.

I’ll just suffice it to say that while it may be politically incorrect to display the confederate flag in certain parts of the U.S. (and some might argue that point as well),  it’s obviously not in Russia. Alas, it’s not my job to judge, but it is my goal to report, so report I shall.

Now where were we? Oh yes, the decor. Well in addition to rebel flags there were all sorts of items from the American past including an Elvis Presley stage backdrop, doo wop artwork and when you threw in the steady stream of hepcats and cool pin up chicks streaming in, well as I said, entering the Grease Bar felt like I had left Moscow and entered the Southern U.S. in the 1950s, with decidedly different accents.

One thing no one could find not argument with was the quality of the music. The “Wise Guys” from Ukraine cranked out some first rate rockabilly to which the appreciative crowd danced like they knew what they were doing!

The aforementioned Viktor was one of the best examples, dancing what can only be described as a hillbilly jig when alone or swinging the ladies around expertly when he partnered up.

The dancing at the Grease Bar in Moscow rivaled that of any I’ve seen at events like “Viva Las Vegas” or any number of rockabilly weekenders.

It was Friday night, the crowd was primed and I was busy interviewing the gang from “Wise Guys” as well as another band in attendance, “The Beat Devils” and some other folks.

I’ll have lots of good video  as soon as I get back to the states and an internet connection that will allow for some video uploads.

In the meantime, enjoy some of the pics from that night and remember to see the complete set visit the Russian Punk & Rockabilly Sets @ the Punk Outlaw FLIKR PAGE HERE.

And remember if your ever in Moscow craving some authentic rockabilly head to the Grease Bar and you’ll be in business.