Respect, Hate or Fear The Po-lice?

Respect, Hate or Fear the Police? I’d say it depends on who you are and where you are. I’ve never been roughed up by the police so I’ve always had a pretty positive attitude about them. They get paid garbage and put their lives on the line to keep people safe. But that is here, in the U.S. under my circumstance. 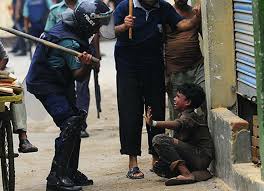 It occurs to me there are 3 basic classifications: The Protected, The Protectors and the Unprotected.

What about in Latin America? Or other countries like Russia? Well, I know first hand in Cuba the police are there to harass and jail not protect and serve.

As I gear up for my trip down through Latin America next month I’m wondering which type of police will we encounter? Will we encounter ones like we did in Quito who made a show of helping me after some local thugs tried unsuccessfully to take my camera but I later learned were probably in cahoots with the robbers?

Or the kind that ignored me in Havana, as they hauled away the punk who’d been brave enough to chat with us on camera about what he really thought of Cuba?

As we roll through Guatemala, a country still reeling from a civil war and where they just  convicted their Ex President of genocide, most people just plain don’t trust the police. Will the police protect us or indirectly (or maybe directly) rob us?

In Colombia, the police were very cool to me. But what if I’d had dark skin and didn’t have a U.S. passport? What would happen then?

This video makes me think twice about the police.

Of course, it depicts bad ones at their worst. 9/11/01 in NYC was New York’s finest at their best. Though I met a few who were scumbags, most I met were just good guys doing their jobs as best they could for an often less than appreciative public. On 9/11 they willingly and heroically gave their lives so others could live.

Police and punk conflict goes back a long ways to the early days of punk, especially in Los Angeles. But at a Pennywise concert in NYC a few years back, there were some punk loving, tatted up NYC cops on stage, singing along to Pennywise’s anthems of self improvement and personal power.

Police, maybe they are just like the rest of us, some good, some bad. I don’t know.

What do you think?

This video below is from the song “Polizia” from Spain’s TOTES KONFLIKTO‘s new CD-DVD “Rates, Magpies and Ravens ” and it’s for sale at www.musikaze.com/konflikto

2 thoughts on “Respect, Hate or Fear The Po-lice?”