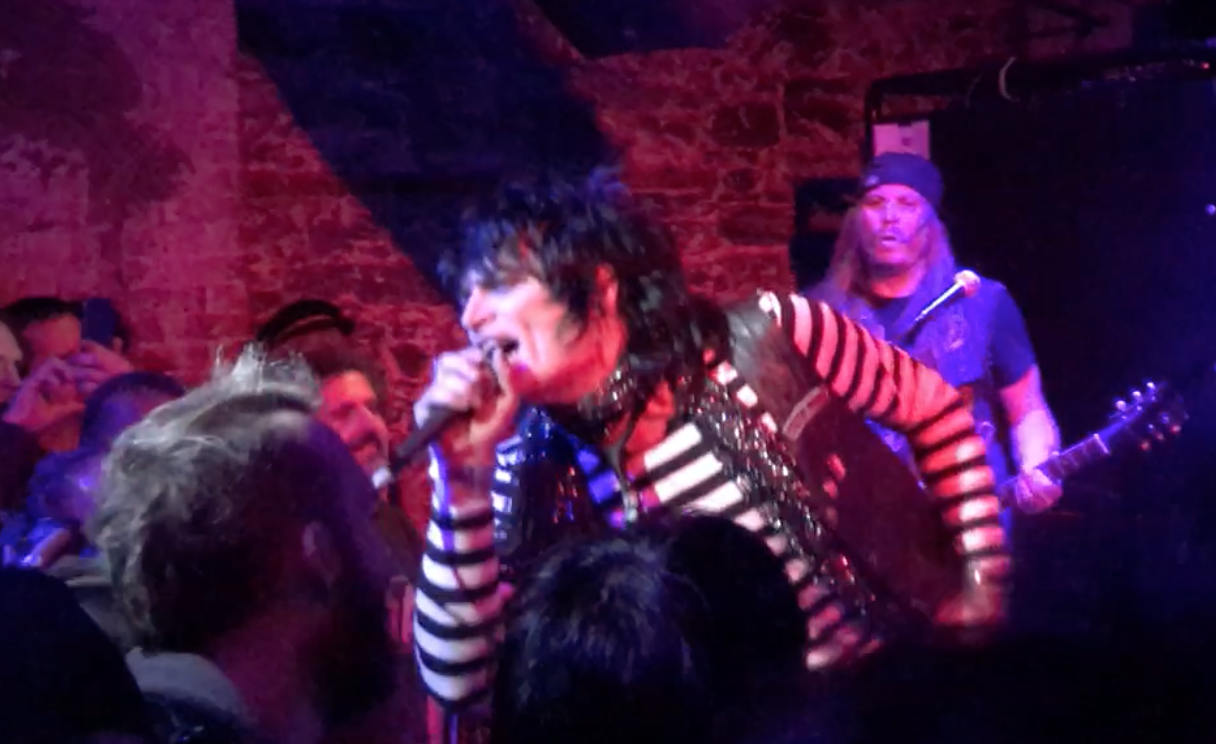 It was a killer show, truly…. no pun intended, no hyperbole either. It was the reunion of the old/new Dead Boys featuring Cheetah Chrome & Johnny Blitz and it was the 1st stop on their 2018 tour.

For those of you who don’t know the Dead Boys, you can read all the gory & fascinating details on their Wikipedia page, you don’t need me for that, but I will give you some of the cliff notes.

The Dead Boys, originally from Cleveland, were early pioneers of the punk movement in NYC back in the mid to late 1970s.  They reunited for a time in the 80s and then once again in the 2000s and most recently in 2017 for a 40th-anniversary tour, but these latest iterations were without frontman Stiv Bators, who died in 1990 in Paris, France from a freak injury received in a taxi accident.

I knew very little of their history and just a few of their songs, but I knew enough to know that these guys are legends. Little did I foresee, however,  what was about to take place at the Bowery Electric on January 28th, 2018 when I redeemed a ticket I’d purchased online a couple months prior.

But before I get to that, let me say I was a tad concerned at first sight on arrival.

Oh sure the opening acts of “Tuff Sunshine” and “Pale Moon Gang” were great, straight ahead rock and roll bands with a hint of garage punk flavor, but the leather jacket-clad crowd with cool hair, seemed almost too pretty for a punk show. Like maybe they were more into the fashion than the music and it wasn’t street punk but pretty boy/ pretty girl poser punk.

For a minute I was transported back into what I thought CBGBs must have felt like back in punk’s halcyon heydays, a real scene. But this was 2017, CBGBs is gone and I don’t do punk scenes. I do punk music.

Was this going to be one of those bad reunion, poser shows? I was tired. It was a Sunday before a Monday and I had lots to do the next day.  The Grammys were on and I was DVRing the thing, maybe I’d go home and catch it. The Dead Boys were taking forever to get to the stage. Yeah, maybe I should just call it a night.

But alas, I stayed and I could not have been more right to have stayed or more wrong about the crowd.

These were punk aficionados and one enthusiastic chap in the front row had reportedly even come from as far away as Beijing in China to see this show. They nor I were not disappointed. In fact, I, now a crusty veteran of a plethora of punk shows from DIY shows in tiny venues in foreign lands to capitalistic infused large amphitheaters in the land of money itself, duh, the USA… I thought I’d seen and experienced it all when it comes to the range of punk bands, performances, and crowds.

Again, I was wrong. Tired as I was, this Dead Boys show brought this old boy back from the dead as I felt I was literally watching punk’s soul being resurrected in front of my eyes. Again, for a brief moment in time, I felt the chill from the sheer thrill of being this close to so much raw emotion and punk rock energy. Suddenly, it was 1977, I was at CBGBs and the Dead Boys were playing for a restless crowd of dangerous punks.

The mosh pit was in full swing. Somone fell down, the crowd picked them up. An older lady who came with her daughter and boyfriend (I surmised), ran for safer ground. Then, someone lost their smartphone and we all tried to help him find it (he did) and bam, I was back in 2017.

So no, this was no dream nor a mirage. This was modern day NYC, 40 years later and the Bowery is not the dangerous hovel it once was. It’s a pricey enclave of hipsters but the folks at the Bowery Electric are not letting our beloved punk music die. They and bands like the Dead Boys are bringing it back to life with appropriate chaos.

Chaos showcasing love my friends, a love of a common bond of music, a love of the past and what the Dead Boys meant to punk history and a love of the present and yes, even the future as an incredibly tight band of musicians mixing old and new faces, sang, played and poured their hearts out for an appreciative, packed, sold-out crowd in ages from very young to geezer territory in a perfectly sized venue for an intimate punk show.

Cheetah Chrome & drummer, Johnny Blitz (once stabbed 16 times in the more dangerous days of NYC) were crowd favorites but lead singer Jake Hout killed it, sorry for the puns, again they are unintentional (this is how I talk), but Jake Hout WAS A SUPERSTAR.

Swimming into the crowd, hitting all the right notes and all the right sneering bad boy poses on all the right songs with talent and authenticity that was unmistakable. Tonight, these were his songs, his band, his show.

This crowd wasn’t full of posers and this wasn’t what I thought it was. It was, in fact, quite possibly, the best punk show I’ve ever been to in my life and it was a complete surprise. The only thing that could have made it better would have been a surprise appearance by Stiv himself, may he Rest In Peace.

Punk indeed is not dead. In fact, I believe that punk and the Dead Boys are very much alive.

But we knew already knew that, didn’t we?