Goodbye to my pal Alex Blue Morales of Normandie Blue 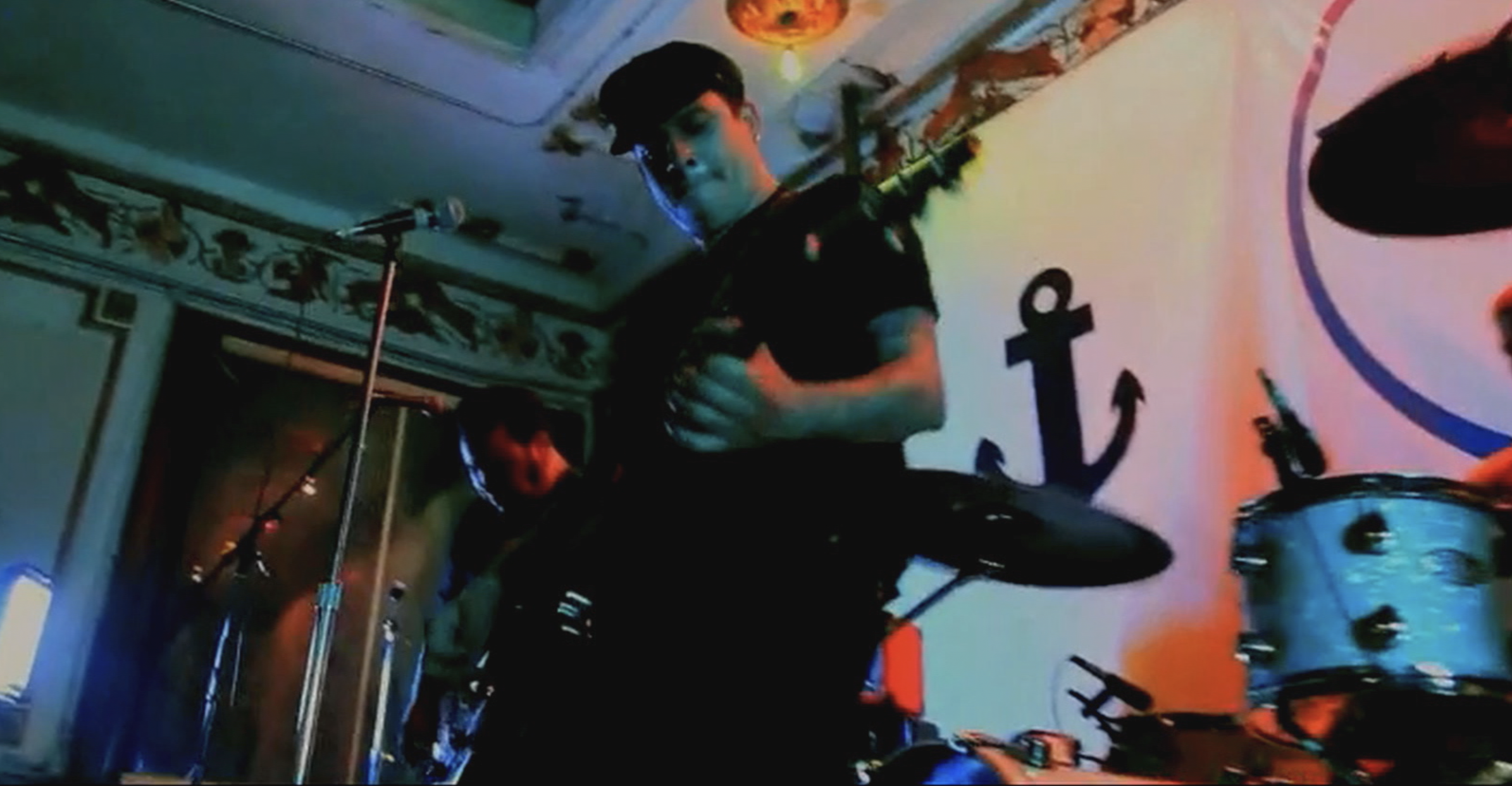 Alex was one of the first artists on Punk Outlaw Records and contributed a lot of music that many of you will recognize from Raw Travel. He was a VERY TALENTED MUSICIAN and a funny, brilliant guy. Compared to his many friendships, we didn’t hang out that much, mostly over a period of two years when I lived in Los Angeles, but when we did, it was always a fun time.

Alex was featured in Raw Travel Episode 110, Mexico City. He guided me to the El Chopo Market on camera and helped us immensely behind the scenes. 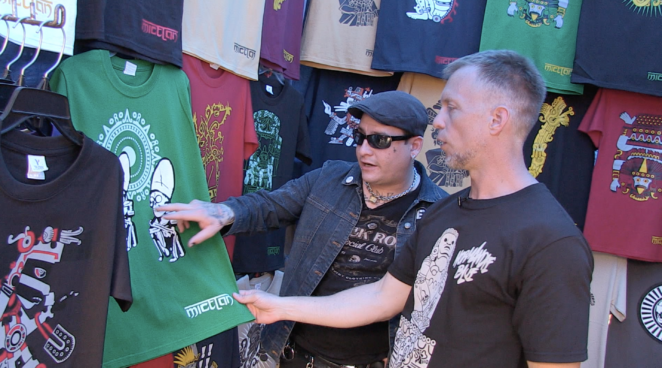 Alex showed me around the El Chopo Market in Mexico City.

In addition to hanging out in LA and Mexico, Alex and I made a road trip from Los Angeles to Vegas for one of the Viva Las Vegas Rockabilly Conferences. Alex disappeared for a few days until it was time to return home. However, I knew he was still around because people were telling various funny stories about something he’d JUST done and I’d JUST missed. I don’t remember what we discussed on the drive home, but I remember the multi-hour drive flying by thanks to the stories Alex and I swapped back and forth. He was an intelligent, heart-warming, and entertaining guy, in and out of music.

Perhaps that’s because Alex had a remarkable life outside of music, serving in the military, living in NYC, Chicago, and Los Angeles, and often traveling to Mexico, his love, where he had many amigos.

Though he was a consummate independent musician, I always felt he deserved way more than I could ever do for him at Punk Outlaw Records. We mostly worked with talent from outside of the USA trying to break them to a US audience. Alex was our first and only US-based artist (though some did move to the USA later).

Like his personality, Alex’s musical and songwriting talent was immense.

If you doubt it, give a good listen to “It Is What It Is” and note the moving lyrics, crazy guitar solos, and haunting melodies (my favorite is “Never Too Late” – video further below). Though the song feels like it’s about love lost, I’ve used it as an anthem for a life of lifelong learning.

Alex was an underrated talent, and Punk Outlaw Records could never do him justice. But somehow, that was enough for Alex. He either didn’t understand his own talent or simply didn’t care. He cared about his fans and wanted to get music out to them. He asked me to do a vinyl record because fans “liked music that they could touch and get excited about” like in the old days. We didn’t have the budget, but Alex wasn’t wrong.

In my opinion, Alex seemed to create music because of an artistic desire to create and express himself more than anything. He created several original tracks just for Raw Travel to use, and we have used them often in the show; knowing we couldn’t commission original music, he agreed to do so in exchange for the songwriting royalties, as is our standard deal with musicians. Occasionally he’d thank me for placing them in the show when he received a check from ASCAP. Not your typical anarchic punk musician at all. Like all on our roster, Alex knew you could be punk rock and respectful and polite as well. You just had to know when to turn it on and off.

Alas, I moved back to NYC, got busy with Raw Travel, and we lost touch. He did leave me a message once saying he’d been in town. I remember being disappointed and a bit annoyed that he didn’t let me know before or WHILE he was in town so we could’ve hung out. I didn’t return his call, being somewhat petty in retrospect and figuring, “what’s the use now”? But it was because I enjoyed hanging with Alex and was bummed I didn’t see him.

As is usual in life, we are sometimes most disrespectful for those we care about most.

Thankfully, we finally spoke for over an hour over the summer for the first time in a long time. We talked about old times in Mexico City and Alex apologized to me for clowning around so much and not realizing the stress I was under at the time, financing a show I had no idea would work or not.  I just laughed and said there was no need for an apology. How can one apologize for being themselves? He promised to send me some new tracks for the show. He never got around to it.

After that call, in particular, I had been listening to his music and thinking a lot about him inexplicably, which, when I saw the news on social media, has me wondering if there was a deeper reason. When I saw the ominous posts on Facebook last week, I felt that sinking feeling that something awful had happened, but was hoping Alex was clowning around again.

Alas, it was no joke. That awful thing that will happen to us all sooner or later had occurred. Alex had passed, sooner instead of later and if you ask any of his family and friends, I’m sure they’ll all say “too soon.”

There are too many funny stories and Alex anecdotes to share here, for now, but I’ll simply say I will miss him and cherish each and every one of them.  Personally and professionally Alex added a dash of bright, splashy color to what has become a pretty colorful life. I wish he could have hung around to create even more, but I know he felt he had his reasons.

Though I talk about him fondly, I didn’t truly know Alex that well, unlike his family and friends on the west coast and in Mexico,  or his former bandmates over the years. But I have spoken to them and can confirm that the ones I’ve communicated with are torn up. My heart goes out to them and his family.

If you didn’t know Alex and his music, so that you can get to know Alex better, I include some youtube links to Alex’s interviews and music videos, including one we produced together in 2010 when I was living in LA, “Hard to Forgive.”

Apologies for the low-resolution video quality. It was something Alex complained about. I couldn’t see it then, but now I see exactly what he was talking about. Sometimes I’m a pig-headed fool and it takes the death of a friend to see clearly. Perhaps that’s the meaning of all our lives and friendships and the pain we endure as a result of them. The survivors must learn from the deaths of our friends… until eventually, we all have left the earthly plane, and hopefully move on to some kind of spiritual dimension, leaving a legacy of mixed-bag goodness and badness behind.

For Alex, in my experience, it was mostly good and I’m thankful for the time.

For others, who were closer, I know that it may be hard to forgive Alex for leaving us too soon, but I ask that you try. I can only assume the pain was more than he could take. One gets the feeling artists and musicians often feel pain more deeply than others. It may be the price of talent to put such feelings into such beautiful words and melodies.

I, for one, will focus on the memories of our good times and the music Alex made, which live on.

Alex, you will be missed, my brother. Sorry I didn’t pick up the phone while thinking about you recently. I would have loved to have spoken one last time or helped you through whatever was haunting you. But the memories we had… Rest in Peace.

If you are depressed and having suicidal thoughts, get off the computer/phone NOW and call or text 988. Nothing is so dark that it cannot be overcome, and help is available. It is not weak to need help. It’s human. It’s why we’re here, to help each other out.