Bikini Killed it in NYC 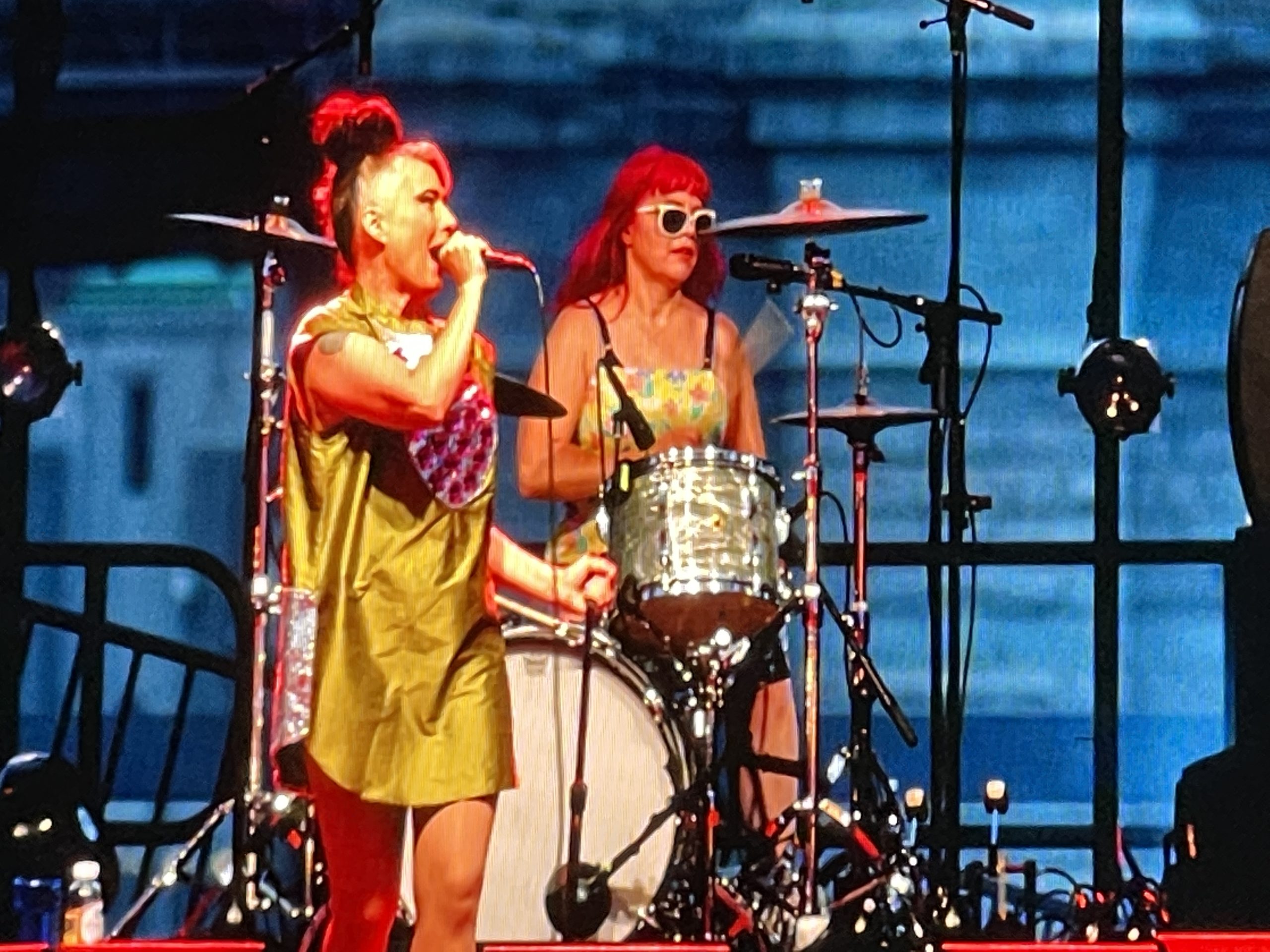 Another evening, another “revenge” concert show in NYC. This one featured the legendary and resurgent female punk band Bikini Kill and yep, they “killed it.”

Under threat of rain (it was again Pier 17’s Rooftop downtown NYC) and variant (yes, you-know-what is surging again),  the crowd stretched around the entire seaport, surprising my silly expectations.

I don’t know what I was expecting, but I was not expecting a crowd so large (turns out it was “Sold Out”). I should have known better. 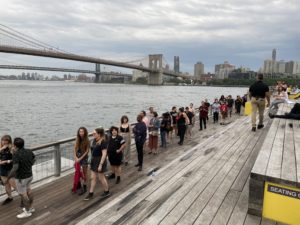 The line for the show

Perhaps it was because BK’s tour had been delayed and postponed repeatedly due to covid?

Or perhaps NYC is exactly in Bikini Kill’s wheelhouse?

Or it is simply a result of BK’s resurgent popularity, thanks to a politicized and untrustworthy SCOTUS and a super-young band called the Linda Lindas that exploded on the scene during covid?

Or maybe all of the above? Whatever!

Even if I hadn’t dug their music or almost any all-female and female-fronted punk bands, I would have gone anyway if only for the people-watching. And because old, fat, (and very dead) white guys like Rush Limbaugh would have rolled in their graves as the pompous cigars jammed in presumably a no-longer-ample, rapidly-decaying ass slapped against the sides of their solid gold-lined coffins (again, presumably).

Yes, these were… gasps! “femi-nazis” in the flesh!  Just as that bloated, hate and opioid-filled blimp used to spew into the airwaves daily to the seal-barking approval of his “ditto head” non-thinking, not-sharpest-tools-in-the-shed, mostly involuntarily celibate, almost exclusively white, male, and entitled audience. Full disclosure – I’m a straight, middle-aged, white, entitled male… and if you can’t tell, I hated Rush Limbaugh and love Bikini Kill. 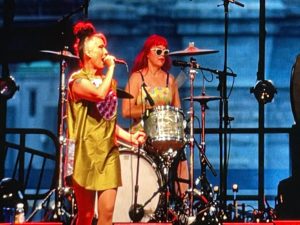 Yes, this crowd likely had no ditto heads in sight. The crowd was, I’d say, approximately 60-65% female, but the 35-40% or so of males certainly weren’t all gay fanboys of BK.

Many men were straight-up punks and coupled off with their wives, girlfriends, or gal pals. Others, like me, were solo and looked (yes, looks can be deceiving) straight and straight out of any contemporary punk show.

But male or female, straight or gay, I found the attendees’ fashion choices for the evening fascinating and invigorating.

Yo, this was NYC in all its alternative, and don’t give a damn, glory, and it was awesome. All colors, all orientations, all ages… as could and should be expected.

But this show was different in other ways as well. Proof of vaccinations was required for entry. Maybe that explains the long lines or the uncharacteristic shouting and herding through metal detectors entry by security who resembled TSA agents at Newark airport more than Pier 17 and normally fairly polite security.

Now, where did I put my vax card? Okay, Okay, please stop yelling! I AM stepping all the way to the front. Geez, is this Pier 17 or an NYC airport circa 2019?

There were lots of masks for an outdoor show, much more than my first outdoor concert in 2021’s come-back concert with Rise Against. What gives? Was this a result of the latest variant?

Given Kathleen Hanna’s banter with the crowd about covid protocols, shout-outs to the “invisible sick,” evisceration of the selfish world culture that meant covid is likely with us to stay instead of going the way of H1N1, Swine Flu or Ebola, etc., this was likely by design.

This show was clearly designed to be as safe as possible. And whether that’s a result of covid rescheduling their tour multiple times, or just sincere feelings, I can only speculate. But it sure sounded refreshing to me, compared to other bands who wholeheartedly ignored the fact that we’ve been in a covid hell for 2+ years when they came on stage.

I mean, really, Rise Against? Nothing to see here, just finally back on tour? At least say a word of respect to the dead and buried. Well, BK did not disappoint in that regard. 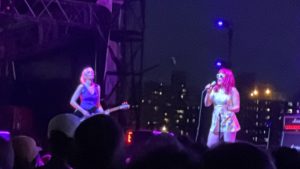 The other difference from other Pier 17 shows – No plastic cups for the canned beers to be poured into. That makes so much sense. Less time to serve the beer, but most importantly, no tsunami of useless one-use-only plastic cups showering the ground post-concert. Was this a result of Bikini Kill’s influential hand? I don’t know, but I approve.

Attention Pier 17 – EVERY show should be thus (however, sans the shouting security, please).

Whether Kathleen or Tobi, the vocal power of the evening was impressive, as was the musicianship, but just by stating this aren’t I being a tad sexist?

Well, then, let me balance it out and say this. I have been to tighter shows. This was after all their first performance in a while, on what will be a multi-city, multi-country excursion.

But at such a large show, I’ve experienced perhaps none more authentic and honest, especially when Kathleen was singing and didn’t hit the note the way she wanted. She stopped the band and began all over.

Or she forgot the lyric and confessed her mistake to a crowd afterward, which I imagined, either didn’t notice (like me) or could care less. 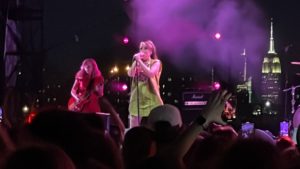 All this was endearing but Kathleen’s banter between songs was LOL funny and felt authentic and honest.

Then it was Tobi’s turn on the mic. Just when you thought she was perhaps having an extreme case of nerves as her voice shook slightly, she would then begin to belt out her tunes and hit ALL the high notes of anger, resentment, love, loss, etc. one expects from a Bikini Kill song. Nah man (or woman), first show or not, these ladies were ready.

Of course, I, being a relatively recent fan from the fringes, was awaiting “Rebel Girl,” their big hit, which has been revived somewhat by the aforementioned, up-and-coming Asian Female Teen (and child?) Bikini Kill punk prodigy from LA, the Linda Lindas (due in town in a matter of days).

After an obligatory encore, Bikini Kill ended on “Rebel Girl” and then wasted no time at goodbyes as they ran off stage to the loudest roar of the evening.

If people-watching is your thing, this was your show.

If female power is your thing, this was your show.

If a glimpse at what the last 2.5 years perhaps could have been like with just a modicum of empathy replacing the rampant tyranny of entitlement and selfishness is your thing, this was your show.

But if you are a ditto head, this was NOT your show.

Rush Limbaugh famously once said he’d never met anyone doing a job for any other reason but money… I guess Rush had never been to a punk show.

In fact, I’d bet all the money Rush ever earned and could not take it to the grave with him on it.